We have made a new short pandemic video.

Please join us tomorrow night (Friday, June 26) as we launch our new video.

In the current issue of The WholeNote, Andrew Timar writes:

“…In another fascinating March 4 concert – this one by two very different choirs, Schola Magdalena presents the joint program Weaving the World with Schola Magdalena and Darbazi at the Church of St. Mary Magdalene. Schola Magdalena’s guest, Darbazi, is Toronto’s first choir specializing in the performance of the polyphony indigenous to the peoples of the Republic of Georgia. The resident choir will sing Gregorian chant, for which they are justly respected, and medieval choral works by Hildegard and Dunstable. Darbazi will perform selections from its extensive Georgian repertoire. The listing also mentions the performance of the intriguing but as yet undesignated ‘new music.’ Will the two choirs jointly sing a new work or two? My advice is to go and find out, along with me.”

We are excited to be performing with Darbazi, a Toronto-based Georgian choir. Please join us on Saturday, March 4 at 8pm at The Church of St. Mary Magdalene. See event details.

Our summer concert will be at St. John’s Anglican Church in Waupoos, Prince Edward County. This is a change from the original location of St. Mary Magdalene, Toronto.

Schola Magdalena will be singing the Maundy Thursday service at The Church of St. Mary Magdalene, on Thursday, March 24 at 6pm. All are welcome to attend this beautiful and contemplative service.

Due to illness, Schola Magdalena has withdrawn from this special concert in support of sponsoring a refugee family. 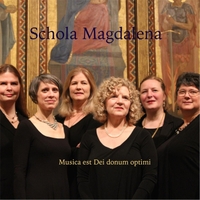 This canon by Roland de Lassus (also known as Orlando di Lasso) was originally written in 1576, but Schola Magdalena has updated it and played with the canon to create an ethereal effect in the divine acoustic of St. Mary Magdalene’s Church, Toronto.

This recording is available for download from CD Baby

Our current programme is, “In Praise of Holier Women.” We gave this concert for the first time in Kingston at the end of May 2015, and will repeat it in Toronto on June 12, 2015, and in Oakville in January 2016. In this programme, Schola Magdalena honours seven holy women of the church: the Blessed Virgin Mary, St Hildegard of Bingen, St Marguerite Bourgeoys, Julian of Norwich, St Bridget of Sweden, St Cecilia, and Florence Nightingale.

The first woman saint we honour, above all others, is Mary, the Mother of God, whose acceptance of God’s call to her set in motion the history of salvation through Jesus Christ.

St Hildegard of Bingen was an abbess, mystic, theologian, scientist, artist, prophet and spiritual advisor, and one of the greatest female religious figures of history. In her autobiography, she describes visions she experienced at the age of three, which she kept hidden. A turning point in her life came at the age of 43, when she felt God instructing her to reveal her visions publicly. Since women were forbidden from writing or preaching, she was reluctant, but with the encouragement of a supportive bishop, Hildegard began to record her visions in words, music and paintings. Quite surprisingly the church authorities reacted positively, and she received papal authority to speak and write about what she had experienced. Her writings on theology and medicine are remarkably modern. Her expertise as a natural scientist and therapist are highly regarded today. Emperors, kings, princes, popes and clergy sought her counsel on spiritual and worldly matters. A poet and a musician, Hildegard composed 77 pieces of liturgical music and a musical play.

St Marguerite Bourgeoys is the earliest Canadian female saint. According to Dr. Mairi Cowan, “Marguerite Bourgeoys was a teacher, the founder of the Congrégation de Notre-Dame de Montréal (an uncloistered religious order for women), and often considered a founder of Montreal itself. She is an important figure in Canadian history. The life that she took as a model for her own was that of Mary, mother of Jesus, and the aspect of Mary’s life that she most strongly wished to emulate was what she called Mary’s vie voyagère. This was a journeying life, a life working alongside the Apostles and other disciples in the early Church and going to where she was needed.”

Julian of Norwich wrote The Revelations of Divine Love, an undisputed masterpiece of mystical theology and the first book written in the English language by a woman. From Fr Stephen Reynolds’ book, For All the Saints, we learn that Julian, “experienced visions when she was thirty years old during an illness that brought her to the brink of death…The heart of Julian’s visions was the knowledge of God in the crucified Christ.” Julian wrote, “Love was our Lord’s meaning. And I saw for certain, both here and elsewhere, that before ever he made us, God loved us, and that his love has never slackened, nor ever shall.”

St Bridget is the most celebrated saint of Sweden. An aristocrat who married and had children, she worked for a time as a lady-in-waiting for the Queen of Sweden, and was well-known for her charitable works. After her husband’s death in 1344, Bridget entered the religious life and devoted herself to caring for the sick and poor. She founded the Bridgettine order of nuns and monks; work her daughter carried on after her death.

St Cecilia is perhaps best known for being the patron saint of musicians. From the Standing Commission on Liturgy and Music of the Episcopal Church, we learn that according to fifth century sources, Cecilia was a woman of noble birth and extreme devotion, whose witness resulted in the conversion of her new husband and his brother. Because of this, the brothers were martyred, and while Cecilia was burying them, she too was arrested. During several days of failed attempts to put her to death, she is remembered for the passion with which she sang praises to God. The date of her martyrdom is generally thought to be 230 during the Roman persecution of Christians under Alexander Severus.

Since the fourteenth century Cecilia is often shown playing the organ, a theme picked up by Raphael in a famous 1516 altarpiece. Her story has inspired centuries of artistic representations, and composers such as Handel, Purcell, Howells, and Britten have written choral works in her honor.

Of Florence Nightingale, Fr Steven Reynolds writes: “We remember [her] chiefly for her work during the Crimean War. Hearing the voice of God and animated by the spirit of service, she organized the first modern nursing service in the British field hospitals at Scutari and Balaclava. In the midst of appalling conditions she was tireless in her efforts to relieve the sufferings of wounded and dying soldiers. Her solitary vigils in the hospital wards led the popular press to call her the Lady of the Lamp and the Angel of Scutari. Within four years of her return, Nightingale’s health broke down, and she eventually became a house-bound invalid. But she continued to influence public policy, and helped to disperse the age-old prejudice against nurses, giving their profession high respectability. Her example helped liberate middle-class women from a subordinate and passive role in society. By the time of her death at the age of ninety, her reputation had assumed mythical proportions, and she is still honoured as the founder of the modern profession of nursing.”

We honour the Blessed Virgin Mary with an excerpt from Guillaume Machaut’s Messe de Notre Dame (Mass of Our Lady), the oldest complete setting of the Mass by a single composer for four voices. It is our great privilege to sing this ancient masterpiece, transposed for us by York University student, Joe Amato.

Also included is music written by two of the saints we honour, Hildegard and Bridget. Sacrae Familiae, sung in honour of St Marguerite Bourgeoys, is a sequence hymn from the Ursuline monastery in Quebec, and is the earliest known polyphonic work written in Canada. You will also hear two modern compositions: Stephanie Martin’s Of the Glorious City, a setting of a text written by Julian of Norwich, and Ubi Caritas, which was written specifically for Schola Magdalena by a young composer, Emily Walker (born 1991).

Saturday, June 12 at The Church of St. Mary Magdalene, Toronto at 8:15pm